by Deborah Metzger, Founder and director of the Princeton Center for Yoga &amp; Health 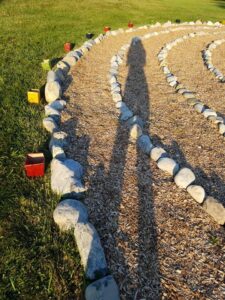 What is a labyrinth?  The labyrinth is an ancient symbol seen in cultures around the globe. Exactly when it became a walking path is a bit of a mystery, but today they are popping up in schools, hospitals, community centers, and places of worship world-wide. Many people find profound effects in walking the labyrinth, often in times of transition or when seeking inspiration or simply finding a stillness and peace.

In speaking about the impetus for creating the labyrinth at Princeton Yoga, Director Deborah Metzger notes: “This year marks the 20th anniversary of the Princeton Center for Yoga &amp; Health. My early vision for the Center was to create a haven for people to follow their unique path to health, well-being and self-actualization. As Maslow taught, this need for self-actualization does not always follow a standard progression. Part of my vision for the Center included having a labyrinth (initially metaphorical) as a way to support people on their path. Though it seems that one meanders along the circular walking pattern, the labyrinth has one path which leads to the Center. In fact, one of our early ‘tag lines’ was Find your center at the Center. This year (now fully settled into our new home, a scenic 5-acre campus at 88 Orchard Road, Skillman), seemed the perfect time to bring the labyrinth into being.

In contemplating the labyrinth, one phrase which came to me again and again is:  ‘Not all those who wander are lost.’ ~J. R. R. Tolkien.  There is no right way or wrong way to walk the labyrinth. You make a choice to go in, go around and around its circuits, yet always find your way to the Center. For some, it represents a journey to our own center, a meandering but purposeful path that always leads back out into the world.  A perfect metaphor!

I searched for someone to help in with its implementation and found a Kripalu colleague, Deborah Ketter, who is a certified, advanced Veriditas labyrinth facilitator, Kripalu Yoga teacher and artist. She and I together choose and modified a classical 7 circuit design to allow for extra gathering space in the center and came up with a plan to make it so.  She completed the project  beautifully with heart and intention – from initial layout/measuring, finding organic materials like the stone and mulch, recruiting the people to help build it and together, with some of our teachers, students and volunteers, worked for days in the hot sun yielding the what you now see. We envision adding additional landscaping and other features to the project (benches, found objects and the like) over time – this too will grow organically as there is no rush and no “ending” to the circular path!” 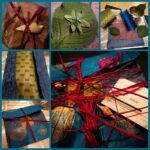 An opening event inaugurated the new Princeton Yoga labyrinth.  Following a short talk on the origin, meaning and ways of walking the labyrinth, participants were guided in the custom of preparing “despachos”, or prayer packets, with objects of symbolic significance, and ended with a candle-lit walking the labyrinth.

Traditionally, Andean despachos are made as offering of thanks-giving or atonement, or as a petition for guidance. Bundles are carefully arranged, wrapped then burned as a way to “dispatch” prayers. In the August 24th workshop participants will make their own artful prayer packet and use it as they walk the labyrinth, planting intentions in the quiet field of pure potentiality.

About Deborah Ketter, BFA, E-RYT 500, is a certified, advanced Veriditas labyrinth facilitator, Kripalu Yoga teacher and artist. She presents nationwide, including Kripalu, North America’s largest yoga training center, and has been building labyrinths and facilitating labyrinth walks at yoga studios, schools, community centers and hospitals for 15 years. Trained by Lauren Artress at Grace Cathedral in San Francisco, Debbie also studied labyrinth design with master builder Robert Ferre. As a yoga teacher, she uses a creative and therapeutic approach to teach the art and science of yoga, with a focus on guided relaxation.