By Deborah Metzger, Owner and Director 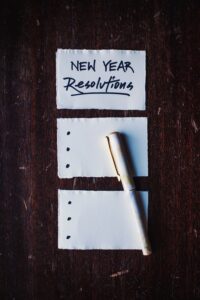 Humans have been making – and breaking – New Year’s Resolutions for thousands of years.  Improvements in health are perennial favorites: losing weight, quitting smoking, exercising more, and taking time for relaxation, are likely to top many people’s lists.

Unfortunately, research and surveys show that a small minority of resolutions last even one month. According to Deborah Metzger, Director of the Princeton Center for Yoga &amp; Health, the problem is not in the resolutions themselves, but in our mindsets as we make them.

Metzger explained that according to Yogic principles, most people make three serious errors as they set their resolutions. First, they judge themselves harshly.  This leads to the second error, choosing unattainable goals. They magnify the gap between where they are and where they want to be. That causes the third error, thinking that the only way they can climb such a tall mountain is by beating themselves up until they reach the top.

“This combination of errors sets up a spiral of failure,” Metzger said. “The minute you start with negative judgments, you lose the ability to make positive changes.&#8221; For example, a woman who attends yoga class to “fix” her stress-related problems may actually spend the class berating herself for not attending every day: “This feels so good, why do I only go once a week? She’s just given herself a negative message for doing something positive for herself.  Why would she want to keep repeating that experience?!”

When judgment leads to unattainable goals, the first misstep can spell the end of the resolution.  “If someone who loves ice cream vows to stop eating ice cream all together, that’s just not reasonable.  So the minute they have a single spoonful, they just give up and say, ‘Hey, why not eat the whole half gallon?’ “

When resolutions can only be kept by discipline and fear of self-inflicted punishment, Metzger asserted, they are not sustainable. “In the end, we only do things that give us pleasure or help us avoid pain. If we think of the change we want to make as essentially negative, as requiring us to give up something we love, then we’re fighting against ourselves. Our old habits will prevail.”

The Yogic model of personal change, by contrast, consists of three simple decisions: awareness, acceptance, and adjustment. “Awareness, as opposed to judgment, means knowing where you are right now. If you want to follow a map to get to a destination, the first thing you need to figure out is where you are on the map. It’s not to beat yourself up, but simply to allow you to make good decisions.”

Acceptance means acknowledging your situation without wishing it were different. “Once you accept reality, and stop fighting against it, you can make a conscious decision to try something new,” Metzger explained. Often, non-judgmental awareness all by itself causes a shift, or adjustment – the change feels natural and effortless.

With this mindset, there can be no failure, only more information to help make better adjustments in the future. “Awareness is the key to the whole process. But in our culture, we prefer numbness to awareness. We run around and keep busy rather than quiet our minds and pay attention to our inner needs and wisdom.”

To help people get into the right mindset for keeping New Year’s resolutions, the Princeton Center for Yoga &amp; Health offers some 50 classes per week in addition to special weekend workshops and immersion.  “We want people who are curious about yoga, who would like to experience difference styles and intensities, to see what feels right for them.”

Metzger said that the Center’s motto was, “Yoga for every body. You don’t need special clothing, you don’t need to look like a model, you don’t even need to be able to stand up!  We welcome you as you are, and our morning, lunchtime, evening, and weekend schedule accommodates virtually everyone.”

Mindfulness in the Continuing Pandemic